After what seemed like a whole winters worth of cold weather (a little over a week here)we have warmed back up. I got the new “Federal” boat put together finally and was dying to get it out. Edmond, the Grayton beach harbor master, and I ran test ran her in the bay on a windy choppy day for the sea trial and we were pleased with the results. In the bayou at Point Washington

I had to wait for a week for a calm day to make the first trip in the gulf though. Last Friday laid down enough to for me to take my son William, and one of my long time regulars on a real test run,. We ran over 55 miles in the Gulf putting the new ride through it’s paces and trying to figure out what worked and what needed changing. The boat holds up well and is very dry, probably the driest riding 20 footer I have ever been on. It is still a mono hull though and I have been spoiled by my last 4 catamarans, it does bounce more and is not quite as smooth as that famous cat ride. It is faster, will carry more weight and ..did I mention it was dry ?… a real plus when you are running 20 miles offshore in 3 foot chop and it’s winter ! William and John ( my angler) were both impressed by the ride and told me I was just spoiled and that the boat rode great. John owns a little bit bigger mono hull himself he runs all over the Gulf when he isn’t fishing with me so I valued his opinion. Oh yeah.. we found time to do a little fishing on the shake down cruise and found some BIG AJ’s to tussle with. We all got hammered several times but came back with our limit. William was high hook with the biggest. 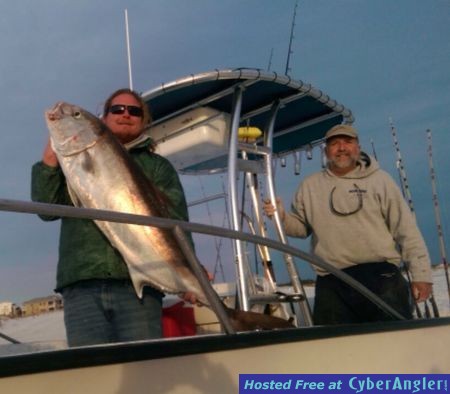 I was able to run a couple charters with the boat the past 2 days as well. It turns out that both my groups were from Columbia Tn. and not only knew each other but were neighbors. Neither group knew the other was fishing with me until the day before the first trip! Both trips caught some fine Amberjacks as well as Vermillions and Pinks. The big question now is who is going to win the ‘I had the biggest ” game when all you can compare is pictures back in Tennessee. 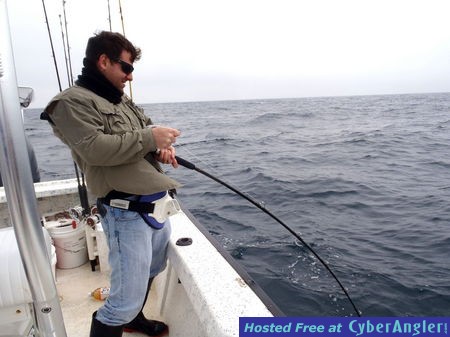 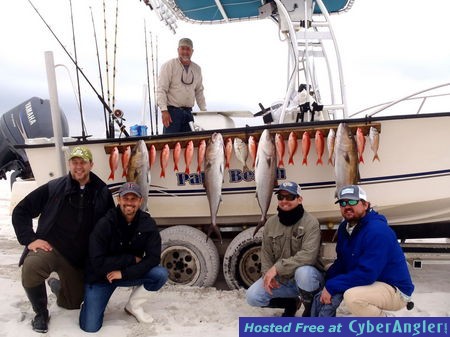 These fellows had fished with me prior but this was their first shot at Jacks. They were very happy with the results! 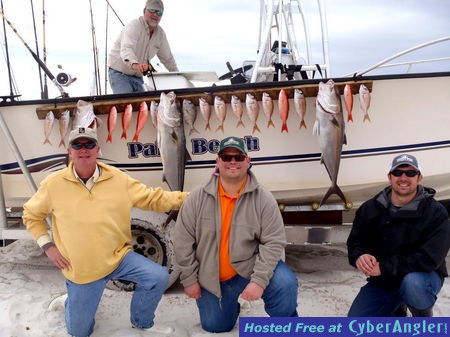 The neighbors answered back the next day with some fine fish as well.

So, I now own another boat that I really did not want but he Feds have forced me to purchase to keep my fishing style. I’ll run this boat on the longer trips as it has the Federal Fisheries permit on it and keep the Dead Fish for state waters where most of my fishing is. The cat will abide by State law and have a longer Snapper season ( 70 days proposed this year)and be able to fish for species the Feds close but not the State. The new boat will be able to run offshore to federal waters and catch Jacks this time of year. When the Feds implement catch shares (it passed through the Gulf council last year) I should have some red snapper quota for this boat that we can fish when the State season is closed.

More maintenance, insurance, investment and permits…. but.. we should be able to legally run charters for quality fish all year…. I remember when fishing was a lot more fun and a lot less political!