The past two weeks we’ve had some wonderful weather here at the beach.

Warm, sunny and calm with no crowds, it’s times like this that makes you remember why you live here!

Alas, all good things come to end and it started blowing pretty dang hard out of the NE yesterday morning and the forecast is for that wind to continue for most of the week. No big surf on the beach (yet) but I sure wouldn’t want to be two miles offshore in a 23 knot wind.

We made good use of the calm weather and I ran lots of trips. My anglers had some really good days with quite a few glory catches thrown in between a bunch of “just” good ones. The kings have been steady with most fish being average size but a few big un’s thrown in. Several days had those mackerel bites where you had to hide the hook just to bait it they were hitting so fast. The pelagics starting showing up a little early for the Fall run as well with some nice size Mahi making an appearance a few days. I had been hearing about quite a few sailfish being seen (and a few caught!) by the kayak fleet trolling up inshore but hadn’t seen one myself until day before yesterday.

First thing Friday morning we are trolling a half mile off the beach, catching Kings and we have a rod slam down but no hookup. My angler grabs the rod and starts to wind when the bait gets hit again, I saw the sail come up out of the water and slap the bait several more times and I’m yelling at my angler to stop winding and just twitch the bait but he was excited and kept pulling the minnow away. His wife however grabbed the other rod that was out and I was able to drag that bait right in front of the fired up billfish and she stuck ’em! A great battle, lots of jumps, yelling, big runs and we got the fish up to the boat for a clean release after pictures. I had asked for pics from my anglers (I was holding the fish’s bill so I couldn’t take any) but haven’t got any yet… if I do I’ll put one in the next report. That gal not only got the sail but she was the only one of the crew to land a Grouper as well, her husband said he would have to hear about it for the next year. I would certainly hope so!

here are some pics I did get to take from the past two weeks. 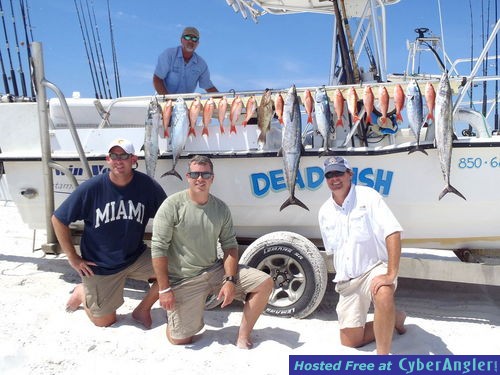 The fellow on the right usually brings his 10 year old fishing fiend son and not business associates. I asked him how long it had been since he got to catch a big King and not have to get pushed aside, he said two years. He was smiling as much as if his son had caught it. 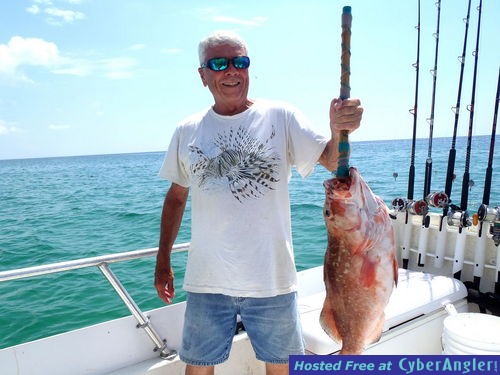 Another long time client and fishing buddy with his first Grouper after a (too) long sabbatical due to health issues.. His best friend was quick to say ” He’s back!” when this fish hit the deck.

Another great catch of “M & M’s “… Mackerels and Mingos, the staples for lots of great fish dinners. 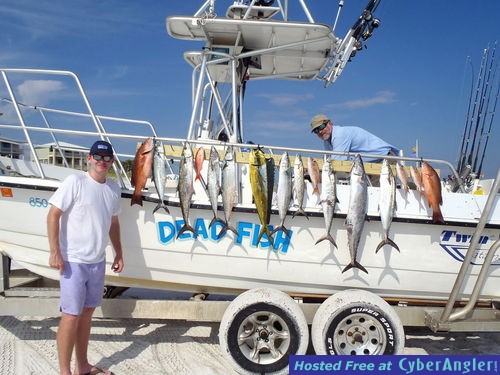 One of my few one person trips… With a great catch for a boat full let alone one guy on a half day trip. That Mahi was pure sugar frosting on the day. 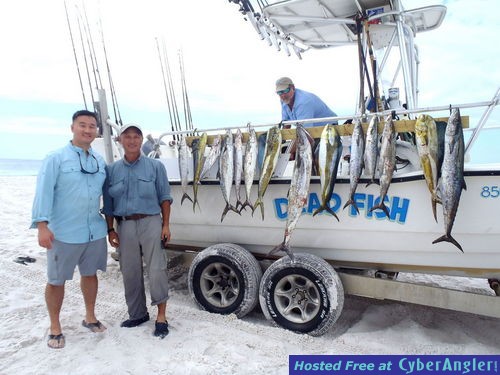 This father & son team had wanted to troll for an hour or so and then bottom fish for a bit but the wind was blowing pretty hard from the NE and it was rough offshore but fishable on the beach so I suggested we just troll. I love it when a plan comes together! 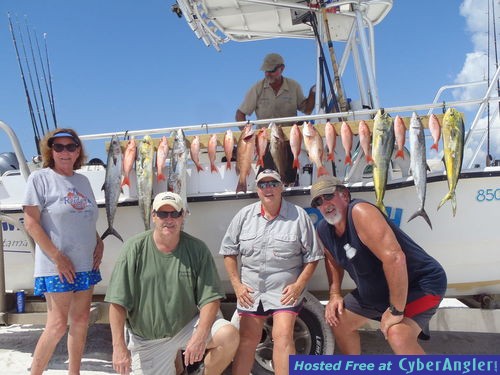 Long time regulars from Atlanta with a great catch. That gal on the right makes a habit of always catching not only the biggest but the most fish too. 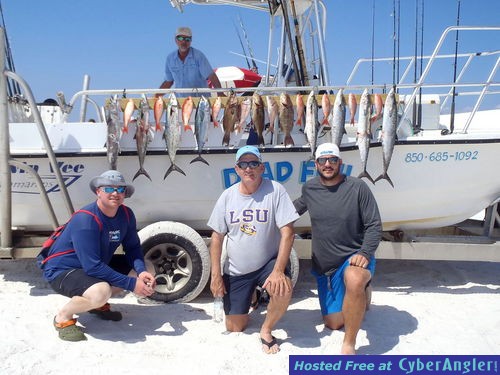 The bottom bite should get a little better as the water starts to cool and the surface bite should get really hot as well. October has always been one of the easier times to fill the box!